In 1986, a number of Thailand’s yachting fraternity met to discuss what they could do as a special tribute to His Majesty the King’s forthcoming Fifth Cycle, or 60th birthday, the following year on December 5, 1987. 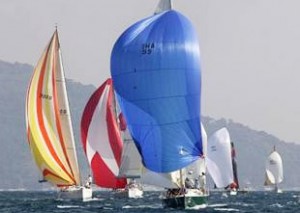 This year marks the event’s 25th year of prominence on the Asian yacht racing calendar.
The King’s Cup Regatta attracts some of the world’s best yachtsmen, ‘yachtswomen’ and their expensive boats to the waters of Kata Beach, off the island’s west coast, where these local and visiting sailors vie for the coveted trophy, creating a truly spectacular sight in the process. Beginning on November 30th, the races run until December 7th.

The inaugural Phuket King’s Cup Regatta was founded in 1987 by Royal Varuna sailors including Commodore Chris King, Dr Rachot Kanjanavanit, Al Chandler, Adolph Knees and others. It was yachting and Phuket aficionado M.L. Tridosyuth Devakul, better known as renowned architect and developer Mom Tri, who placed the resources of his then recently opened Phuket Yacht Club Hotel at Nai Harn Bay in Phuket at the regatta organiser’s disposal.

The regatta began with a mixture of keelboats, catamarans, Lasers and even windsurfers. Few who were there at the time will ever forget Varuna member Reg Chambers, who sailed a Laser, calling “starboard” on a 45-ft keelboat, which had to give way.

Like any prominent yacht racing event, the Phuket King’s Cup Regatta has developed its own folk-lore. Scott McCook, for example, who sailed his beach-launched catamaran up from Singapore, won all five races one year, then sailed the small cat back to Singapore.

More recently the regatta has become a big boat event, attracting keelboats and ocean-going catamaran teams from around the world. As a principal fixture on the Asian Yachting Circuit, the regatta annually features upwards of 90 boats (record of 103 in 2007) and 2,000 sailors, ranging from the Formula One of the sea lanes, the Racing Class, to live-aboard ocean cruisers, multihulls and classics.

International-standard race management has been combined with lively beach parties on most nights during regatta week to create a world-renowned yacht racing event.

Under the Royal Patronage of His Majesty the King of Thailand, the Regatta is organised by the Phuket King’s Cup Regatta Organising Committee under the auspices of the Royal Varuna Yacht Club, in conjunction with the Yacht Racing Association of Thailand, the Royal Thai Navy and the Province of Phuket.