The SONGKRAN FESTIVAL is held Every Year from the 13th to 15th April.

The Songkran festival ; from the Sanskrit word saṃkrānti,[1] or literally “astrological passage”) is celebrated in Thailand as the traditional New Year’s Day from 13 to 15 April. It coincides with the New Year of many calendars of South and Southeast Asia. 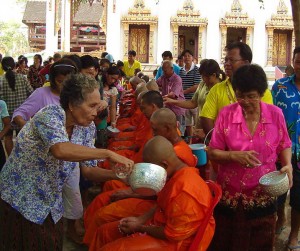 The date of the festival was originally set by astrological calculation, but it is now fixed. If these days fall on a weekend, the missed days off are taken on the weekdays immediately following. Songkran falls in the hottest time of the year in Thailand, at the end of the dry season. Until 1888 the Thai New Year was the beginning of the year in Thailand; thereafter 1 April was used until 1940. 1 January is now the beginning of the year. The traditional Thai New Year has been a national holiday since then.

Songkran has traditionally been celebrated as the New Year for many centuries, and is believed to have been adapted from an Indian festival. It is now observed nationwide, even in the far south. However, the most famous Songkran celebrations are still in the northern city of Chiang Mai, where it continues for six days and even longer. It has also become a party for foreigners and an additional reason for many to visit Thailand for immersion in another culture.

The most obvious celebration of Songkran is the throwing of water. Thais roam the streets with containers of water or water guns (sometimes mixed with mentholated talc), or post themselves at the side of roads with a garden hose and drench each other and passersby. This, however, was not always the main activity of this festival. Songkran was traditionally a time to visit and pay respects to elders, including family members, friends, neighbors, and monks.

Besides the throwing of water, people celebrating Songkran as a Buddhist festival may also go to a wat (Buddhist monastery) to pray and give food to monks. They may also cleanse Buddha images from household shrines as well as Buddha images at monasteries by gently pouring water mixed with a Thai fragrance (Thai: น้ำอบไทย) over them. It is believed that doing this will bring good luck and prosperity for the New Year. In many cities, such as Chiang Mai, the Buddha images from all of the city’s important monasteries are paraded through the streets so that people can toss water at them, ritually ‘bathing’ the images, as they pass by on ornately decorated floats. In northern Thailand, people may carry handfuls of sand to their neighborhood monastery in order to recompense the dirt that they have carried away on their feet during the rest of the year. The sand is then sculpted into stupa-shaped piles and decorated with colorful flags.

Some people make New Year resolutions – to refrain from bad behavior, or to do good things. Songkran is a time for cleaning and renewal. Besides washing household Buddha images, many Thais also take this opportunity to give their home a thorough cleaning.

The throwing of water originated as a way to pay respect to people, by capturing the water after it had been poured over the Buddhas for cleansing and then using this “blessed” water to give good fortune to elders and family by gently pouring it on the shoulder. Among young people the holiday evolved to include dousing strangers with water to relieve the heat, since April is the hottest month in Thailand (temperatures can rise to over 100°F or 40°C on some days). This has further evolved into water fights and splashing water over people riding in vehicles.

Nowadays, the emphasis is on fun and water-throwing rather than on the festival’s spiritual and religious aspects, which sometimes prompts complaints from traditionalists. In recent years there have been calls to moderate the festival to lessen the many alcohol-related road accidents as well as injuries attributed to extreme behavior such as water being thrown in the faces of traveling motorcyclists.

The water is meant as a symbol of washing all of the bad away and is sometimes filled with fragrant herbs when celebrated in the traditional manner.[2]

Songkran is also celebrated in many places with a pageant in which young women demonstrate their beauty and unique talents, as judged by the audience. The level of financial support usually determines the winner, since, to show your support you must purchase necklaces which you place on your chosen girl.