HELD IN PHUKET  EVERY OCTOBER

A colourful event held over a nine day period in late September/early October, this celebrates the Chinese community’s belief that abstinence from meat and various stimulants during the ninth lunar month of the Chinese calendar will help them obtain good health and peace of mind. The ceremonies of the festival take place in the vicinity of the six Chinese temples scattered throughout Phuket. The main temple is Jui Tui Shrine not far from the Fresh Market in Phuket Town. The first event is the raising of the Lantern Pole, an act that notifies the nine Chinese gods that the festival is about to begin. 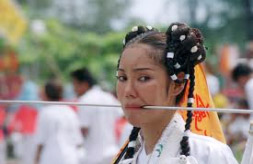 The pole is at least ten metres tall and once erected, celebrants believe that the Hindu god, Shiva, descends bringing spiritual power to the event. Usually street processions take place, where visitors can see participants walking in a trance. Other events include hundreds of local residents running across a bed of burning coals, or climbing an eight metre ladder of sharp blades while in trance. Apart from the visual spectacle of this festival, visitors can partake in specially prepared vegetarian cuisine made available at street stalls and markets around the island during this time.

One of the most exciting aspects of the festival is the various, (and sometimes gruesome) ceremonies which are held to invoke the gods. Firewalking, body piercing and other acts of self mortification undertaken by participants acting as mediums of the gods, have become more spectacular and daring as each year goes by. Men and women puncture their cheeks with various items including knives, skewers and other household items. It is believed that the Chinese gods will protect such persons from harm, and little blood or scarring results from such mutilation acts. This is definitely not recommended for the feint hearted to witness.