A VERY BEAUTIFUL AND POPULAR FESTIVAL IN THAILAND EVERY NOVEMBER 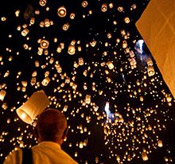